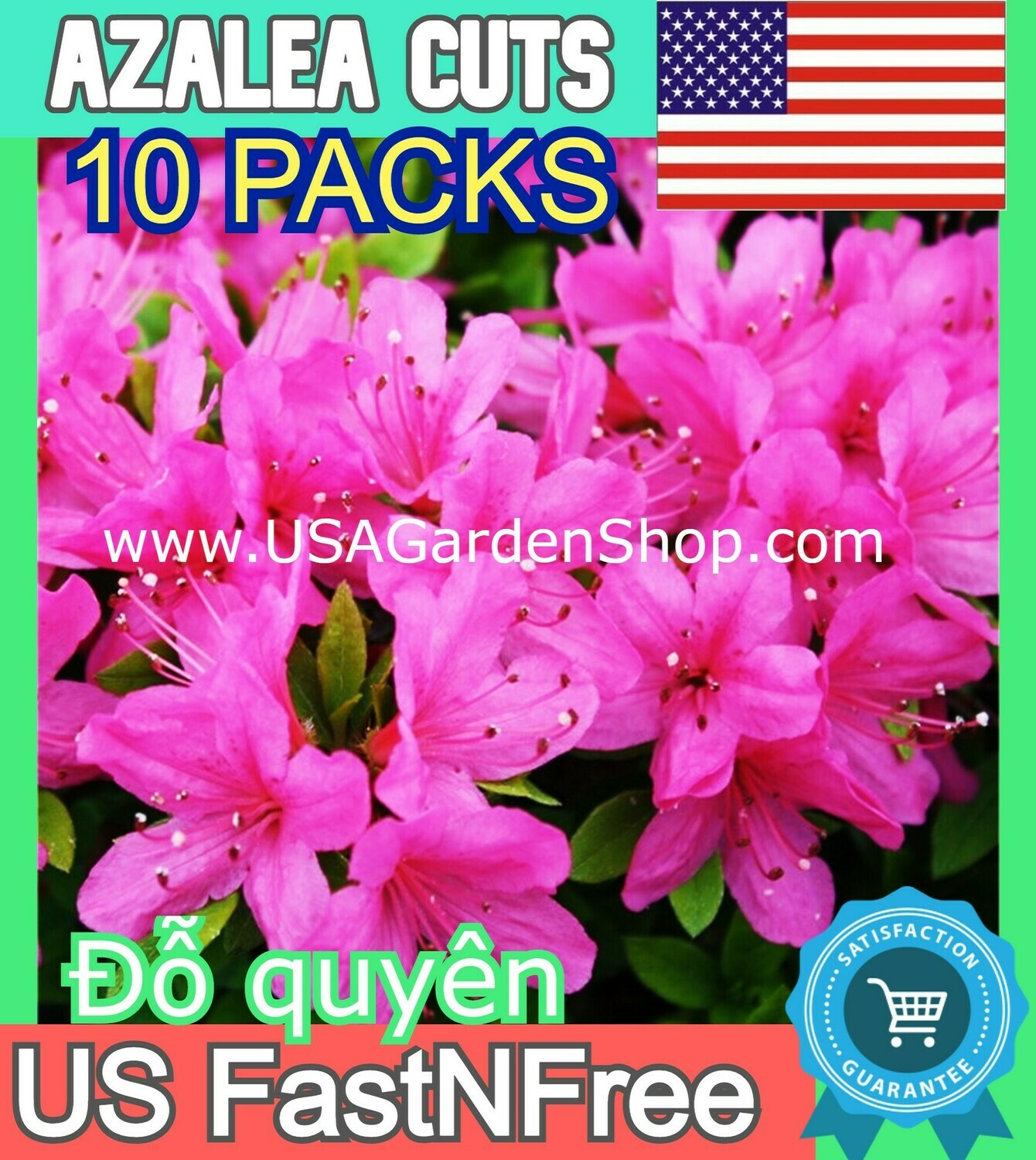 Lavender Bloom-A-Thon Everblooming Azalea Poukhanense Lavender Korean Azalea Dons Variegated Native Azalea Rhododendron Deciduous Flower진달래속 杜鵑花屬 ツツジ กุหลาบพันปี Hoa Đỗ Quyên
Azaleas can be propagated sexually, from seed, or asexually (vegetatively) from cuttings, layers, grafts or by tissue culture. Different seedlings from a cross between two different azaleas may exhibit characteristics of either parent and anything in between. While seedlings from a self-pollinated species azalea will tend to resemble its parent, even they will exhibit some variability. The only way to faithfully reproduce a particular plant is to make a copy of it (a clone) by vegetative means.
When you are ready to stick the cuttings, wound the bottom half inch or so of each cutting by scraping off the bark with a knife or thumbnail. You can optionally use a rooting hormone. With a liquid hormone such as Wood’s, use a 5% solution (mix 1 part of the hormone with 20 parts of water), and put the bottom inch of the cutting in the liquid for no more than 5 seconds. If the solution is stronger or the immersion is longer, you may burn the cutting and it will not root. A talc-based rooting powder such as Hormodin or Rootone is safer to use. Put the bottom inch of the cutting in the powder and shake off the excess. In general, evergreen azaleas root well without any hormone.

The most commonly used rooting medium is 50/50 peat and perlite, although various other mixtures of peat, coarse perlite, sand, fine pine bark and vermiculite are used. The goal is to provide both moisture and oxygen. The medium should be from four to six inches deep, and may be in a flat for large quantities, or a one gallon pot for up to a dozen or so cuttings. Prepare it a few days before you will use it, and water it several times to moisten it well. Leave the medium loose to promote drainage and aeration.

If planting in a flat, use a straight-edge to prepare each row. Lay the board on top of the medium and use a knife to cut a two- to three-inch deep line along the edge of the board. Insert the cuttings into the cut every two to four inches, depending on the size of the cuttings and how long you intend to leave them in the flat. Move the board, cut a new line, insert more cuttings, and so on. In a pot, use a large nail or a pencil to make a hole for each cutting. Use a consistent convention for labeling the cuttings, such as a pot label at the beginning of each row, or a pot label at the beginning of the cuttings for each different kind of azalea.

After sticking the cuttings into the medium, water them in to settle the medium around the cuttings, preferably without wetting the leaves. Then cover the flat or pot with plastic to seal in the moisture. A large zip-lock bag works well with a one gallon pot, and a plastic tent can be made for a flat. Finally, put the flat or pot where it will get as much light as possible, with no direct sunlight. While brief exposure to early morning or late afternoon sun is not harmful, strong daylight sun will heat the enclosure and burn up the cuttings.

The cuttings should root in four to eight weeks. Be patient. While a very gentle tug can indicate progress, it can also break off any initial roots before they get established. When the cuttings have rooted, the enclosure should be gradually opened a little to acclimate the cuttings, and opened entirely in a few more days. Finally, transplant the rooted cuttings to pots or flats of peat moss, sand and leaf mold and keep them from freezing temperatures in a greenhouse or cold frame for at least one year.

Cuttings of deciduous azaleas are more difficult to root. The first problem is rooting them at all, and the second problem is getting them to break into new growth after they have grown some roots. The general procedure is the same as for evergreen azaleas. The differences start with the cuttings, which should be taken earlier, while the wood is still quite soft and green, usually around late May. They will require the use of a rooting hormone. While a stronger rooting hormone will increase their chances of rooting, it makes it harder to get them to break dormancy and go into active growth.

The cuttings will do best in a greenhouse with bottom heat from electric heat cables at around 75 degrees F, and with a mist system during the day to ensure they get all the moisture they can use. However, they can also be rooted under plastic as described for evergreen azaleas.

As soon as they have rooted, the cuttings should be fertilized with half strength liquid fertilizer and given three to four hours of extra light through the summer to force them into active growth. Use 75 watt incandescent bulbs or a mix of incandescent and fluorescent bulbs, as close as possible to the cuttings without burning them, which is about 6 inches away. In late September, stop the extra light to let the cuttings harden off for the winter. Do not disturb their roots until they begin to grow the following spring, at which time they may be potted up or moved to a bed in the garden.
Save this product for later

USA Garden Shop is a small boutique plant nursery that specialized in hard to find and common plants alike. We provide customers with the option of buying seeds, planted sapling, and or live roots. Our nursery is seasonal so there are always different kind of plants year-round. We try to provide our customers with options for every season of the year. Every plant that we grow is taken care of professionally and guarantee that there is no bugs or sickness. So please order with confident and don’t be shy to email us if you don’t see what you are looking for.

Our primary mission when creating USA Garden Shop was so everyone can enjoy organic and pesticide free herbs and plants. In today fast-moving world, fruits and herb is chock-full of pesticide and chemicals. The herbs we love to use in our kitchen are not once how they used to be. We at USA Garden Shop want to promoted growing organic herbs and plants that can be used year round.

Our family like many families here in the United States, are immigrant. When we first got to USA everything was so different and it was very hard to find the herbs that we are accustom to using in Vietnam. Therefore, we started our own little garden with the hope that we can share our wonderful and healthy herbs with everyone.

Ever thought about getting into gardening? Then now is the time. You’ll have a greater opportunity to do this than ever before, allowing you to tap into top quality seeds, live roots, and nursery plants. This means you can get your garden up-and-running with top quality seeds grown here in the United States of America.We don’t import seeds from abroad; we grow everything here in the USA in our own cultivated garden venue. We don’t use any questionable chemical growth processes, nor we do provide fictional growth rates. Everything we sell is 100% home grown, non-GMO plants, seeds, and roots. These are hand-picked from our own garden, where our family works hard to ensure we can provide our customers with the best solutions.