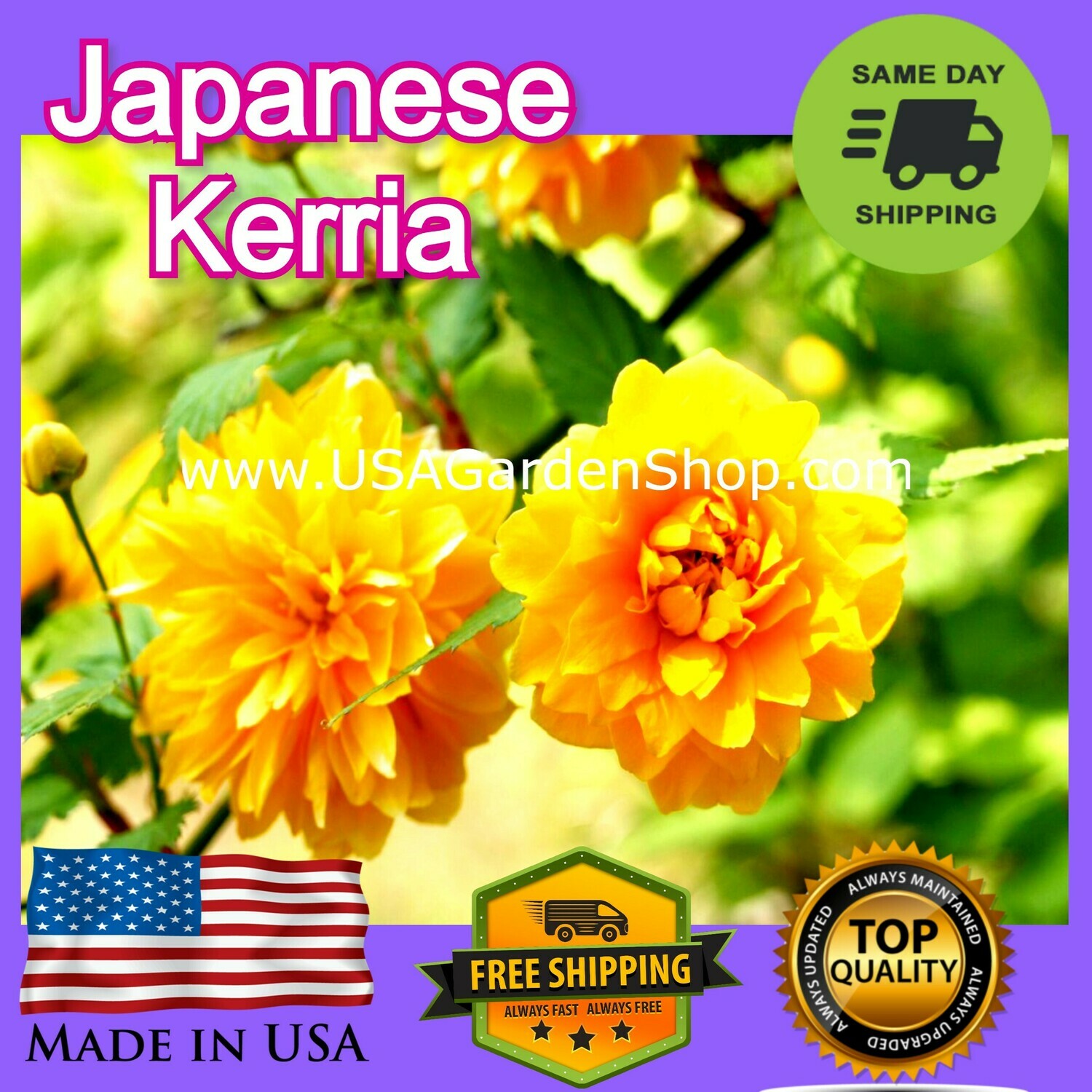 Kerria Double Flowering Japanese Rose Kerria japonica Jew's Mantle 황매화 ヤマブキ hoa Lệ đường 棣棠花 Ditang flower Japan globeflower
Sell Cuttings for Propagate regrow or grafting. No root but very fast easy rooting. Each cut is about 5"-8"+
Kerria japonica, also known as the Japanese marigold bush or miracle marigold bush in the northern New England area and as yamabuki (山吹) in Japan, is a deciduous shrub in the rose family Rosaceae, native to China, Japan and Korea. It is named after William Kerr, who introduced the cultivar 'Pleniflora'. It is the sole species in the genus Kerria; its genus name is also used as a common name (kerria).
Native to China and Japan, Kerria japonica is a plant in the rose family. This small shrub reaches 3 to 6 feet tall and spreads 6 to 9 feet wide. Bright yellow flowers cover the branches in the spring, and the leaves appear a bright green all summer. The broad, rounded shrub is formed by arching branches. In the fall, the leaves turn pale yellow. This bush grows in USDA plant hardiness zones 5 to 9, but does best in zones with mild winters. The main way to propagate Kerria japonica is through softwood cuttings.
Save this product for later

USA Garden Shop is a small boutique plant nursery that specialized in hard to find and common plants alike. We provide customers with the option of buying seeds, planted sapling, and or live roots. Our nursery is seasonal so there are always different kind of plants year-round. We try to provide our customers with options for every season of the year. Every plant that we grow is taken care of professionally and guarantee that there is no bugs or sickness. So please order with confident and don’t be shy to email us if you don’t see what you are looking for.

Our primary mission when creating USA Garden Shop was so everyone can enjoy organic and pesticide free herbs and plants. In today fast-moving world, fruits and herb is chock-full of pesticide and chemicals. The herbs we love to use in our kitchen are not once how they used to be. We at USA Garden Shop want to promoted growing organic herbs and plants that can be used year round.

Our family like many families here in the United States, are immigrant. When we first got to USA everything was so different and it was very hard to find the herbs that we are accustom to using in Vietnam. Therefore, we started our own little garden with the hope that we can share our wonderful and healthy herbs with everyone.

Arrived in great condition...I received a lot more than ten plants as advertised.

Ever thought about getting into gardening? Then now is the time. You’ll have a greater opportunity to do this than ever before, allowing you to tap into top quality seeds, live roots, and nursery plants. This means you can get your garden up-and-running with top quality seeds grown here in the United States of America.We don’t import seeds from abroad; we grow everything here in the USA in our own cultivated garden venue. We don’t use any questionable chemical growth processes, nor we do provide fictional growth rates. Everything we sell is 100% home grown, non-GMO plants, seeds, and roots. These are hand-picked from our own garden, where our family works hard to ensure we can provide our customers with the best solutions.